What is the importance and history of Durga Puja? 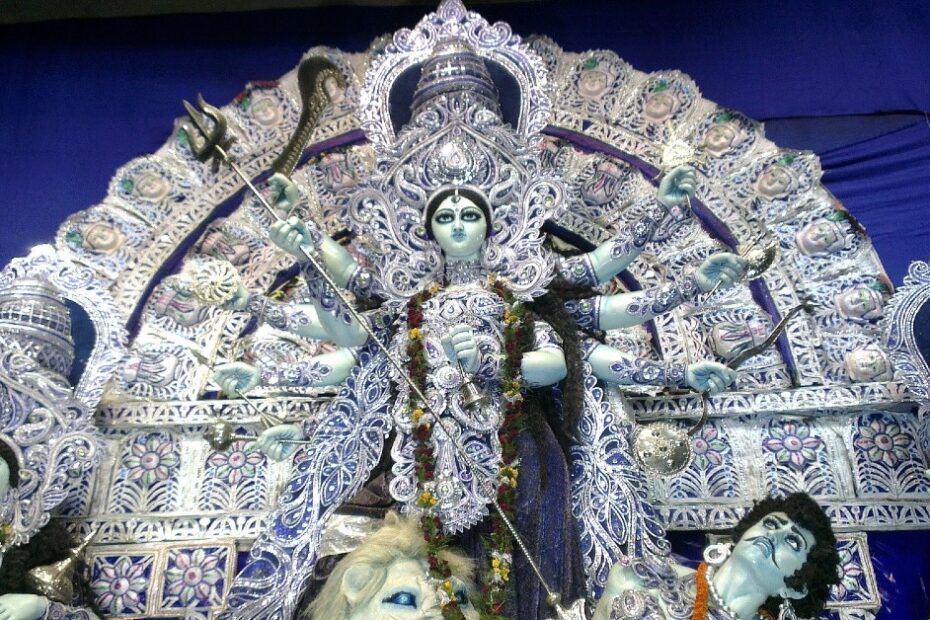 Durga Puja, popularly known as ‘Durga Pujo’ or ‘Durgotsava’ is a vital festival of the Hindus which falls in the months of September-October, traditionally named the Ashwina month according to the Hindu calendar.

It is a 10 days festival which is celebrated with great pomp and show in the Indian states like West Bengal, Bihar, Uttar Pradesh, Orissa, Assam, and Tripura to name a few, the nine nights running parallel popular as Navratri is celebrated with utmost gusto in Gujarat in which they celebrate the nights doing the famous Garba Dance, Navratri is also celebrated in Punjab where they organize ‘Jagrans’ and hymn devotional songs. In the same way, in Uttar Pradesh, Kanya puja Or the puja of small girls is done on the ninth day.

Durga puja glorifies the deity’s triumph over the deceitful and deceptive king of demons Mahishasura. The first day called Mahalya in Hindu scripts signifies the onset of the Goddess’s journey to her native place. The last day when the goddess killed the demon is acknowledged as the most important day i.e Dussehra Or Vijaya Dashmi symbolizing the victory of the good over the evil.

Moreover, the last three days hold much importance, as the festivities start from Shashti, the sixth day of Navratri. The celebration of the victory of Devi Durga holds great importance not only in India but in countries like Bangladesh where it is known as Bhagabati puja and in Nepal where it is called Dashain.

Durga Puja and its history

Durga puja holds its importance in the Hindu culture because of two popular beliefs. Devi Durga was the daughter of father Himalaya and mother Menka and later married Lord Shiva after becoming Sati. It is believed that Durga Puja started from the time when Lord Rama worshipped the divine being to attain powers to kill the Mighty Ravana. Vijaya Dashami is the day when Lord Rama finally killed Ravana and thus people started worshipping the Goddess.

However, there is another set of stories for which Durga Puja is considered as one of the most important festivals in India. The other story considered truthful is that the Devi fought a ten days battle with  Mahishasura, a shapeshifter demon king, and ultimately killed him on the tenth day, after which it is considered that this celestial feminine returns to her husband’s home.

Why Durga Puja is significant according to Hindu culture?

From the sixth day, the processions start and the idols of the deities are brought out in open for the public in special set-ups named Pandals where the idols are placed and Special drums called ‘dhak’ are played especially in Bengal as it is analogous with the Bengali traditions. The processions start from the seventh day also called the Maha Saptami, on this day before dawn ‘Kola Bou’ i.e. a banana tree is submerged in the holy river, and then a saree is draped around it personifying it as the wife of Lord Ganesha, this is known as the Pran Pratishtha ritual. However, some say Kola Bou is only another form of Devi Durga and hence not the wife of Ganesha. They present a different notion that this banana plant is tethered by the priest with eight other plants which form a pious synthesis. These nine plants together are believed to be Kola Bou, the plant form of Devi Durga. The next day, Maha Ashtami is believed to be the day when the demon king was actually defeated by Devi, On this day, Banquet is prepared where a popular Indian dish khichdi is prepared.

After the Sandhi Puja, on the ninth day Maha Navami begins and a Maha Arti is carried on culminating the Puja. On the last and final day, Maha Dashami, it is regarded true that the Goddess returns to her husband’s home and this is done by immersing the idols in the local river. Ladies smudge each other with vermillion, this custom is widely known as the Sindoor – Khela. People dance and chant devotional songs on their way to plunge the figurines in the water and this is how they celebrate the Vijaya Dashami.

Durga puja is an eminent festival of Kolkata, and thus they have their own famous rituals. Kumartuli or the potter’s place is a prominent place where the idols of the deities are made. These effigies are prepared a week prior to the Navratri but only the eyes are drawn after another key ritual, Choku Daan. Kolkata is famous for its pandals, some of the well-known ones are

1.) Located in the Garia ghat is a famous pandal which is famed for recreating the different temples of India. This pandal is named Ekdalia Evergreen.

2.) Kumartuli Park is that place in Kolkata where the idols are handcrafted located near the Bagh Bazaar which is another famous century-old  Pandal.

3.) College Square is yet another captivating pandal set up in the year 1948 beside a lake in Kolkata. Mohammad Ali Park is a further pandal which is close to the College Square showcases the architecture of the monuments of India.

4.) Located in Alipore, South Kolkata is the Suruchi Sangha pandal which delineates a state of India with its artistic technologies.

5.) Earlier popular as the Sealdah Sarbojanin Durgotsava, Santosh Mishra Square, established in 1936 is a famous pandal that opens for the public.

Moreover, Kolkata offers great cuisine and sweet dishes that are exclusive to this place. Kolkata is famous for the ‘bhog’ which is offered to the Devi Durga and later distributed among the devotees in every pandal. Various street food and snack stalls are put up for the public to enjoy.

Durgotsava is a festival that holds immense importance in the Hindu culture, but due to the pandemic, the government has laid special guidelines so as to avoid any mishappenings. Bengal Government has ordered the following set of rules:

1.) The government has ordered the organizers to use electronic and social media restraining the needs of the public to visit the pandals.

2.) Capacious pandals open from all sides only to be put up.

3.) Use of masks and sanitizers has to be made mandatory.

4.) Maintaining Social Distancing has also been made obligatory.

5.) The state government has condemned any kind of fairs Or carnivals.

6.) In order that the organizers do not find any problem in making arrangements according to the guidelines, the government has provided several benefits like free fire brigade, 50% tax discount on electricity charges for the corporation, and panchayat.

Durga puja like all other festivals in India helps to eradicate any differences between the affluent or the impoverished, and come in unison to celebrate the greatest religion i.e. humanity.

previousHow prone are adolescents to drug consumption?
nextWhy classical Bollywood is more ahead of time than modern Bollywood?