Top 11 Netflix shows that you must watch 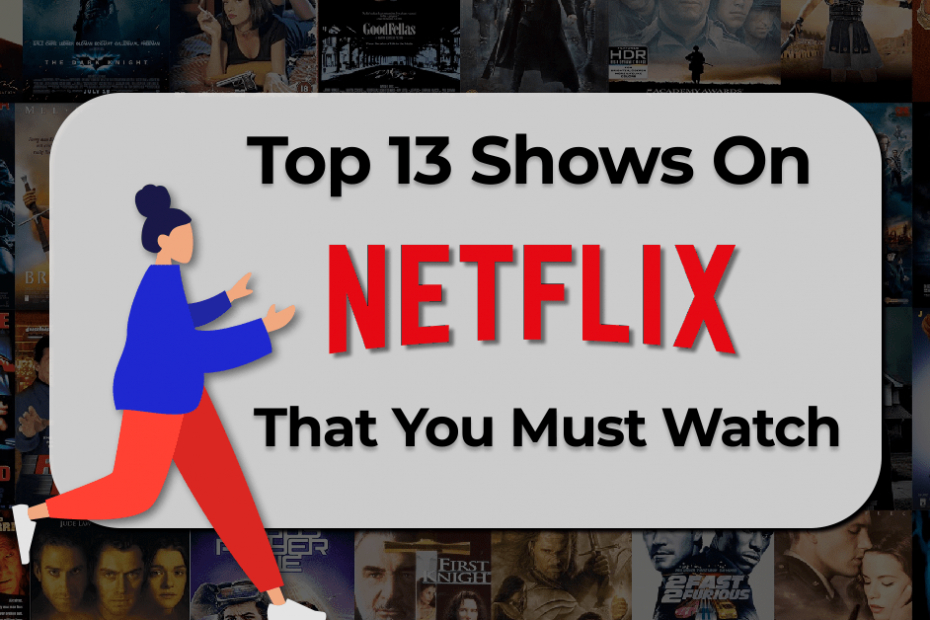 If you are stuck in your home and want to start Netflix but wondering where to start; then look no more. Here are the best 13 shows you can start on Netflix. All of them are divided into categories according to their genre for your convenience. If you are looking for a certain genre of series then you can easily find some of the best recommendations down here. To be on this list, a show must be highly recommended by most legal sites and should have high reviews. To ensure the delivery of the best recommendations; we have done our research to put out the best result possible.

A sitcom is nothing but situational comedy (based in the US), which is majorly comedy-centered and the whole series revolves around only a few fixed characters. A few of the top sitcoms include:

If you have not heard about this before, then you are at the right place. The show is about 6 friends living in New York and how they deal with their lives together. F.R.I.E.N.D.S. is considered a classic and iconic series ever. With its worldwide fame and demand, it tops the list. The show will make you laugh and will act as a true friend in these tough times.

The show is about a family jostling together amidst tough scenes. After getting looted by their business manager, the rose family loses all of their family fortunes, but a town of Schitt’s Creek, which they once bought as a joke. The Rose family relocates into that town and tries to put their life together. The sitcom shows the struggle, a nouveau riche family trying to adjust to the minimum hysterically. This is a very light mood show and could be watched anytime and is one of the safe options to start with.

It is a mode of presenting real-life scenarios through one’s performance and is usually played by emotionally driven characters.

The show narrates the story of a critically ill teacher. He, along with his student, tries to secure crystal meth( a chemical) for his family. The show is so damn good that it has won 16 Emmy Awards. The story is colossal of twists and thrills that make you binge the whole show in one go. All these points yell to watch this classic show and makes you fall in love with the perfect storyline.

The show covers one of the heinous events, the famous Nirbhaya incident in Delhi. You get to watch the whole incident with authenticity and details. All actors are extremely talented and you will be amazed by their performances. This show will portray the actual potential and real talent of our Indian productions. The show was so impactful that it got nominated for an International Emmy Award. Season 2 is on the way, so make sure you don’t miss that out !!

This genre gives viewers an abundant number of feelings of suspense, excitement, anticipation, anxiety, and mystery.

The show has a very unique and original concept. The story elements are slightly scientific and thrilling from the first episode, which holds you to watch the whole season. The show runs around 8 people all over the whole globe, who are not physically connected. The cinematography of the series is pretty commendable. The scenes where all 8 come together, are a feast for the eyes. This is one masterpiece you never wanna miss out on.

The genre is meant to scare, startle or shock the audience with frightening scenes and a sense of story.

The Haunting of Hill House

The show is adapted from the Gothic horror novel and has a fantastic cast and director. Released in 2018, the show has only 1 season and 10 episodes with a bewildering rating of 8.6 on IMDB and is 93% fresh on Rotten Tomatoes. If you are a true horror fan and always wanted a movie to be a bit longer, then this show can consummate your temptation with its breathtaking scenes and story.

Set in a very different era from now, the show is about a Muslim girl Nida (Radhika Apte), and her struggles. She belongs to the era in which a specific community that practices anti-national activities is considered a Terrorist. The show goes in-depth about all these issues with an angle of horror. Things start to become deadly when Ghoul (an Arabic folklore monster) comes into the picture. The show makes terror not only by scenes but also by its storyline.

College or School life could be arduous for a student, a student goes through a lot, and in many scenarios, it is hard to express. Without proper guidance, these erratic incidents can turn into any horrible decision or event for a child. All these issues are addressed in this show. Season 1 explores 13 reasons why a girl commits the horrendous crime of suicide. The show can be infectious and emotional.

Matt Murdock, a visibly impaired and specialist in combat style fighting; is a lawyer. He also leads his life as a Daredevil. The show has taken ideas from Marvel Comics and is resting on its Superhero, Daredevil. Ratings of the show are applaudable, IMDB 8.6/10 and on Rotten Tomatoes it is 92% fresh.

Fresh from the oven the show is picked from the list of latest shows on Netflix. Filled with magic and mystical powers and a combination of mystery, the show is a full packet of entertainment. The success and appreciation of the show can be recognized by its exceptional ratings of 7.7 on IMDB and 87% on Rotten Tomatoes.

The following shows are highly recommended and famous, they do not need any explanation to watch them.

The above are the best suggestions one can start with. A combination of classics, Indian, fresh, and best watch so that you will not feel left behind when your friends brag about the shows they have watched. We are going to come with more suggestions like these in the coming future. Wait and enjoy these recommendations till then. Since you are neck and crop new to Netflix, all the shows are recommended likewise. Netflix is a vast OTT platform and does have a variety of things to watch. Not only shows but movies, documentaries, mockumentaries, reality shows, interviews, and many more. Netflix is a never-ending ocean and delivers some of the greatest pieces. One should watch those shows once in a lifetime to not miss out on these awe-inspiring creations.