50 Most Important Events of World History 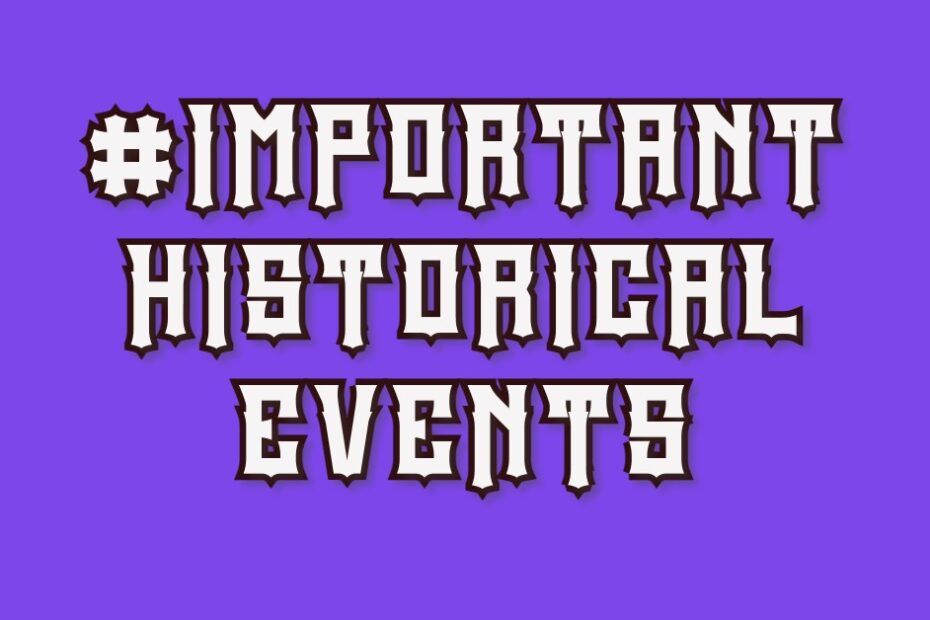 The great Pyramids of Giza were built to serve as the tombstone of the dead kings of Egypt. These kings were called ​Pharaohs. ​It was believed that these Pyramids would act as unparalleled powerhouses where the Pharaoh would attain immortality.

According to history, Rome was founded by two brothers Romulus and Remus in 753 BC. In order to rule the city solely, Romulus killed Remus and named the city after himself.

4. Greeks defeated the Persians at the battle of Marathon (490 BC)

This battle was fought on the Marathon plain of North-Eastern Africa in 490 BC.

Aristotle and Plato are two significant figures of the ancient philosophy.

Alexander, the great was the king of Macedonia and the heir of the Argead dynasty. In 332 BC, he conquered Syria and then Egypt.

He died in 323 BC. Some say that he died of Malaria, others believe that he was poisoned.

8. The construction of the Great Wall of China begins (214 BC)

Emperor Shi Huang ordered the construction of the Great Wall of China.

He had invaded Great Britain twice. Once in 55 BC and once in 54 BC.

Jesus Christ was born in the Kingdom of Judea in 4 BC.

Jesus Christ died in Jerusalem after he was crucified.

Hung’s ‘ the nomadic tribe of Central Asia, the Caucasus, and eastern Europe invaded Europe somewhere between the 4th and 6th centuries in 375 AD.

Muhammed, the founder of Islam was born on 22nd April (570 AD) in Mecca (now in Saudi Arabia).

In September, 622 ADS, Muhammed shifted from Mecca to Medina to escape persecution.

This marks the beginning of the Hijri era.

In 711 BC, Arabs invaded Spain and made it a great Muslim civilization.

The Normans invaded England in 1066 AD. However, they kept the farming techniques the same and they used the same money taxes for people to pay their taxes.

This was one of the most mind-boggling inventions which created a storm in the war history.

This war was a conflict between the English and France over the French throne. It lasted for 116 years.

Also called the Bubonic Plague, the black death plague was considered a pandemic as it had wiped off 35 – 40% of the population of England from June 1348 AD to December 1349 AD.

8th Constantinople was captured by the Ottoman empire in 1453 AD. It marks the beginning of the Renaissance in Europe.

October 12 is the day when Americans get a holiday to celebrate Columbus’s Day in honor of the discovery of America.

This discovery of Sea-route to India was a journey of 6 months which started from the cape of good hope in the Atlantic Ocean.

The Spanish Armada was a fleet of 130 naval ships that started its journey in order to invade England but later it was declared a fail because of being outfoxed by the English and later by the violent sea-storms.

It was founded on 31st December 1600 in order to exploit the trade between east and southeast Asia and India.

The execution of Charles 1 occurred outside of the banqueting house in Whitehall.

The restoration of monarchy took place in 1660 AD when King Charles returned from his exile from Europe.

The glorious part of the glorious revolution of England was that the monarchs shared powers with the parliament.

This battle was fought for the Spanish Succession. Later it was converted into a grand alliance.

It was brought into action by the Act of Union by the respective parliaments of both the nations.

It stated that the Americans were no longer under the rule of the British.

It led to the refinement of the political powers between the rulers and those they governed. It was when George Washington was elected as the first president of America.

Nelson Mandela was shot by a French sniper

At Waterloo in Belgium, Napoleon had to taste defeat at the hands of the Duke of Wellington which led to the end of Napoleon’s era of European history.

Napoleon was exiled on the Island of Helena in 1815, where he died in 1821 due to stomach cancer.

It was proposed by the then Prime Minister of England Lord Grey. It reformed the system of voting in England.

The American Civil war arose between the advocates and the opponent of slavery. It was won by the union.

This war had started between these two countries over the rivalry between the dominance over Korea and Manchuria. However, Japan had defeated Russia in this war.

It was when the Chinese threw off the imperial dynasty which led to the commence of the People’s Republic of China.

It lasted from 1939 to 1945 in which the major global power made two alliances viz the Allies and the Axis.

Ceylon was renamed into Sri Lanka. It was separated from India in 1948 AD.

It was also when the Mount Everest was conquered for the first time in the entire human history.

It was when France tested its nuclear weapon and the Balkan peace accord was signed.

Tags:Top 50
previousPoetry on Bullying
nextWe As A Person Are A Human-Robot