Maharani Gayatri Devi: The lady who defied convention and lived her life independently 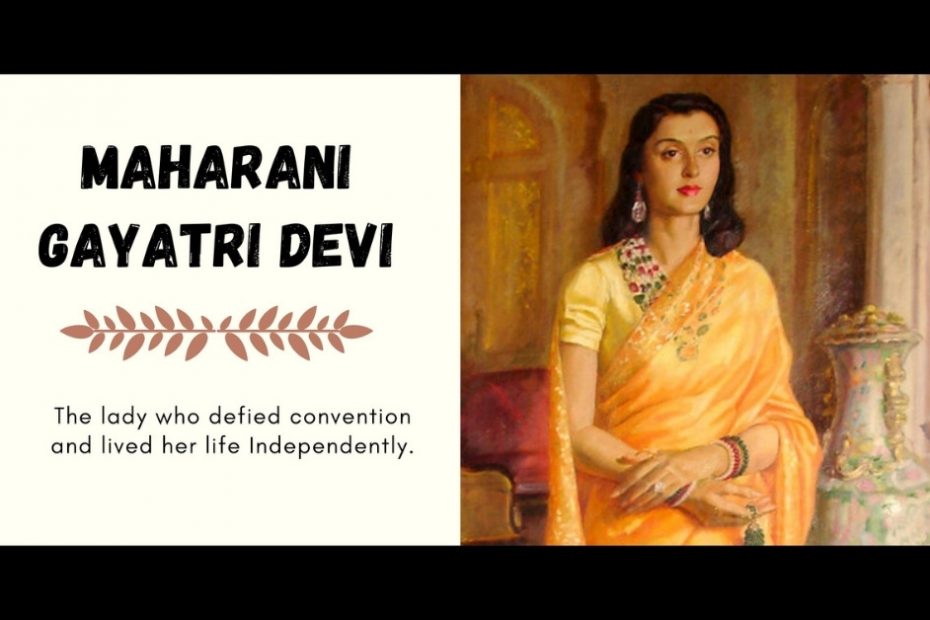 Gayatri Devi, a renowned name in the history of India. A woman of inspirational thoughts, optimistic, daydreamer is yet admirable to every woman of the country lovingly called Ayesha.

Gayatri Devi was the personality who lived her life on her principles which one should apply in their daily lives. Although she was privileged by luck she decided to work for the downtrodden sections of society. She devoted her whole life to helping backward classes. Not only this she also joined the democratic party named Swatantra Party and became a famous face in the political history of the nation. She led a bright political career.

That was the emerging time of women empowerment and Maharani Gayatri Devi was the fresh face to it. She not only helped people by political means but turned into a social reformer too. She worked for women’s education and opened the first-ever girl’s school in Rajasthan with 40 students in 1943, it was named after her name as Maharani Gayatri Devi girls’ school, located in Jaipur.

When we looked in Gayatri’s life we found that she was an orthodox rule breaker. Her vision, wisdom, and knowledge always encouraged her to do the betterment of society. She inherited her qualities and firm nature from her great Grandmother (Maharani ChimnaBai II) and her honorable mother (Indira Devi) which were prominent ladies of their time.

Gayatri Devi fell in love when she was 12 years old with almost a double-aged person who was 21 then. The situation yet was not so much normalized for a woman to marry a person who is twice her age by her own will.

But this was Gayatri Devi who despite the differences and solid social opposition, fought for her love and married the love of her life “Maharaja Maan Singh” happily in May 1940.

Maan Singh had two wives before which automatically made it a hard task for Gayatri Devi to adjust in the family. Maharani Gayatri Devi tackled all the hardships greatly and proved to everyone that her relationship was strong and worthy.

Overcoming all the difficulties of life Maharani Gayatri Devi was leading to greater heights in her life.

Gayatri Devi was the first-ever lady to have won the Lok Sabha seat by 1,92,909 votes out of 2,46,516 which created a milestone in Indian History.

In 1962, when the people’s liberation Army was launching an invasion on a large scale of India’s north-eastern borderlands and Ladakh, caught Indian troops which were not even properly equipped.

The tension between India and China made parliament a fierce space of debate. Gayatri Devi was the one who took this chance firstly to criticize the government’s concealment of time-to-time incursions by China into India for few years. Gayatri Devi’s statement to Pandit Jawaharlal Nehru: “If you had known anything about anything we wouldn’t be in this mess today” shows her bold and sharp political views.

However, she was criticized by L.M Eshwar who was her strong critic of all time. He elaborated ” The Rajasthan phase of the Swatantra Party as the “Quinquennial party of Glamour Queen“.

In 1967, Maharani Gayatri Devi once again won elections in her home constituency but this time the conditions were not accordingly to her. She had to escape England with her family as the Congress party abolished the privileged status of the royal family. The circumstances became worse when her husband died just after a month.

After that, she was recognized as the RAJMATA, the QUEEN MOTHER, and Colonel Bhawani Singh as Maharaja who was the eldest son of Maan Singh by his first wife.

Gayatri Devi was a firm and determined lady. Her habit was to fight even in the worst situations. After the demise of Maan Singh, she again took a stand for her third term in Parliament in 1971 but unfortunately, the royal status was fully unrecognized. 1975, brought a tremendously tough time to Rajmata Gayatri Devi and Bhawani Singh when they got arrested and sent to Tihar jail although there were no major allegations on them. They had to be imprisoned for six months and after that Gayatri Devi had to be hospitalized for some time.

Gayatri Devi’s inner strength supported her to fight for the imprisoner’s rights and, she became successful in curbing the purdah system which was prevailing on a large scale and practiced by women in Rajasthan.

Qualities to be remembered

Gayatri Devi was counted as the most beautiful woman of that time and people used to believe that her beauty was not an ordinary one to be considered. Her fashion trends were famous nationwide, and she was the first lady who started wearing chiffon sarees. Gayatri Devi was a sports lover she enjoyed polo a lot and was a fine horsewoman herself. Her life is remarkable for us as despite her royal privileges she did not choose to live a straight lavish life but decided to work for society, her elegance and charm would affect generations to come. Especially, girls get empowered by her story. As she never stepped back whatever hurdles came in her life.

Feel free to share your views on this blog and your perception of the life of MAHARANI GAYATRI DEVI, do like, share, and please mention in your comments.