The Lost and Forgotten Wealth of India 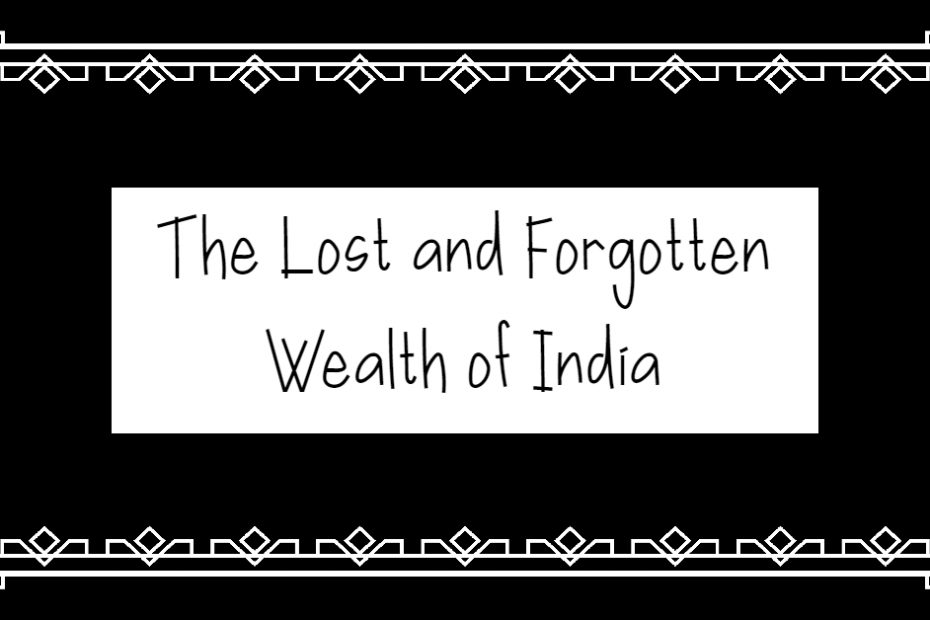 India, the land of diversity was once known for its world-class heritage and prosperity. India was known to be the wealthiest nation all over the world. There was a time when everyone was attracted to it and appreciated it largely.

In the history of India, in the terms of wealth and prosperity of India, the temples had a major role to play. We came across many huge temples which are adorned by golds and silvers in abundance. The temples of India were alluring other countries as well.

Mainly if we talk about temple of Ajmer, it was known as three fair pagodas rich in gold stone.

The famous Somnath temple was famous for the attack of Mahmud Ghaznavi. He attacked the temple not to conquer it but to do the loot.

Meenakshi temple is famous yet but several others in the southern part where you remembered richness of India.

According to Arnold Herman Ludwig: India has been celebrated even in the earliest times of her riches.

The most prominent source in the richness of India which containing 1150 kg of gold was the unremembered Peacock Throne.

Diamond Kohinoor was the highest allurement of all the times.

According to Greek historian Strabo: The greatest of all nations and the happiest in lot.

And yes, I have also heard this in my college when I was pursuing my graduation by our present defense minister Honourable Shri Rajnath Singh Ji. He was sharing his experiences. He quoted there: “Our country once has no beggar”. It was really unbelievable to hear that and to compare it with that current situation.

What is the current situation now…? Are we competing at the same levels…?

The wealthiest of all we have was the divine nature and the weak conditions of our country.

India has almost every possible favorable condition for every kind of vegetation, plantation, but if we see from the perspective of history the spices were the great source of attraction. European countries invaded India just because of the spices which later became the cause of trade and after that the cause of colonialism.

Whether we talk about Taxila or famous Nalanda in the ancient times.

Is the present situation of institutions match with the previous ones if yes then please give your opinions?

If we throw some light on the lives of the people, how they were interconnected with each other, how the criteria were interdependent to each other. What were the purposes of the different religions? How the inter-religious beliefs were accepted by different communities, really widens the richness and prosperity of India?

There was a time when the relationship between Hindu and Muslims was not so much divided. They didn’t seem like before as they are now. The confliction, the inferiority, and superiority complexes were not as present before as are now in present. Many of the stories and tales signify the integrity of India, which somehow today is distorted in many parts.

I believe that Ancient and Medieval India had not so many cultural disparities neither in their minds nor in souls like it is now. The problem is that things appear to be correct but are they actually appropriate?

Our country had immense destructing values in terms related to Dalits and scheduled castes. However, after some time the condition was better but then again in modern India, the subdivision between the castes and tribes has become so usual.

Not only on the matters of social inequality but if we compare economic and political disparities between the different ages, the data would highly fluctuate.

Today, we are at that stage where we should understand that what is the actual development we have done till now. What are real shortcomings that we have overcome?

We should think or emphasize the fact that how much the evolution in every term we have gone through. Are our minds related to what we study? Are we connected to the practical approaches? How social reforms affect society as a whole? Are now social reformers like Raja Ram Mohan Roy, Ishwar Chandra Vidyasagar, preachers like Swami Vivekananda, leaders like Mahatma Gandhi, Abdul Gaffer Khan still present?

Is the divinity between the teacher and student, parents and children, Boss and workers, Country and countrymen affected now?

There are several answers to these questions, any single answer in one dimension will not be appropriate but yes these are the prominent factors of our society and we should think about it. “Unremembered richness of India” not only tells about the heritage, wealth, and material richness but also shows us the incredible valuable morals of the country which are firm pillars for society and the nation as a whole to prosper.

All these things made India popular all over the world. The Arabs, the Persians, The French, The Dutch, The English all were in the queue to conquer this holy land. We had faced many obstacles to maintain our own identity and to preserve our wealth. Today we have lost a lot of things from the past, the wealth and prosperity, but we are on the way to achieve all the richness of India again. India is on the way to its whole development. We all hope we will be the rank 1 country to be known again.

So, what you people think would India be capable of having a share of GDP like before. Please share your opinions in the comments. I think of course if all things go in the right way then anything is possible just the thing is to be well aware of things.

Tags:forgotten wealth of India
previousWidows, Middle-aged people getting into relationships, is it so hard for Indians to accept?
nextHow Toxic Positivity is Counterproductive and Dangerous to Mental Health?