The Legalization of Prostitution: Socially and Ethically, Right or Wrong? 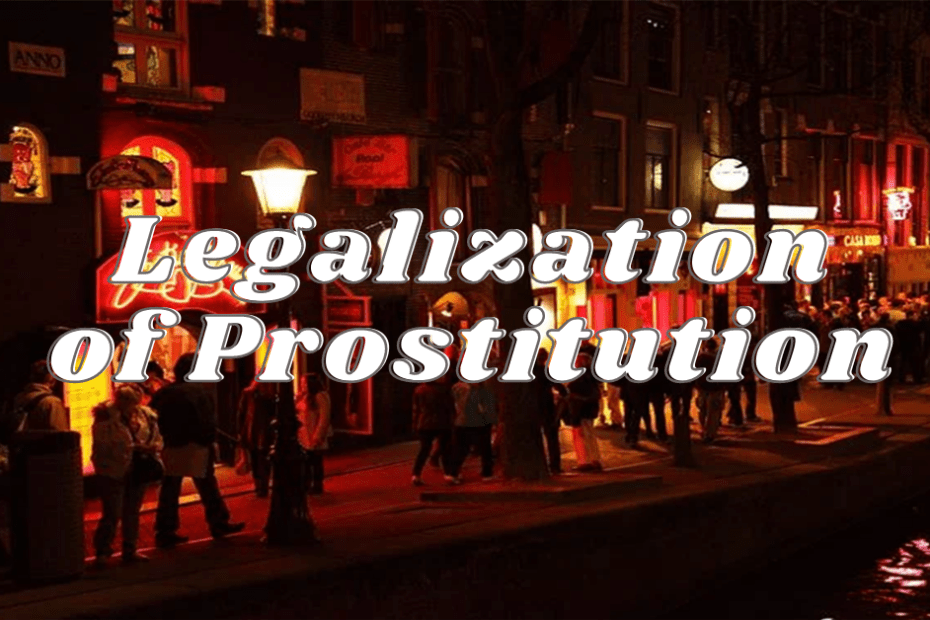 It is a very controversial topic to discuss over that too for decision making, which should be socially & ethically correct. For me, it is more of the points of view of a person. Those who are in opposition are also not wrong, it just that their priorities differ. Though we have to choose in between these two, considering the betterment of the majority & for the future also.

The business of sex in return for payment/money & not all prostitutes are female, homosexual, male all are a part of it. It is as simple as any other service in exchange for money and as difficult, complex, immoral, or unethical as ‘sin’. Prostitution is not any newly founded controversial practice, it is a practice followed by ages. The only difference is in some societies it is profession while in others it is illegal, crime & against the values and morality. But still, it is tolerated widely all over the world legally or illegally. In a few cases, it doesn’t stop with sex & money only but leads to inhuman activities –human trafficking, sexual assault, rapes, drugs, etc. In mid of 19th century with the rising of feminism & the spread of AIDS, a number of efforts were made to suppress prostitution and other activities related to this. The root reason was sexually transmitted diseases (STDs) with the health of prostitutes & feminism. Ever since then it is an evergreen topic to discuss over.

A total of 15 countries is there around the world already have legalized prostitution. Germany, Bangladesh, Brazil, Canada, Columbia, Australia, New Zealand, France are a few of them. They legalized it with required rules & regulations, brothels are there & they even pay taxes to the government only for mindful contribution to the economy.

Most of the time we got to hear that becoming a part of prostitution is neither their first nor last choice. Some are forced to join or some in the murky narrow path of their life they left no other choice. In unfavorable & odd circumstances they choose to prostitute instead of leaving their loved ones to rot in hands of cruel society who only spit not help. While there are also others where person sanely & consciously put a step in this field analyzing all sort of aftereffects on their life. It is not that they are ‘bad’ people to push them to the outer edge of society or outcaste them from humans but everyone owns to do whatsoever to make their life self-satisfactory.

Then it means even rape should also be acceptable? Because filthy & horny people do it for self-satisfaction? Well then look a little deeper. Even though with a new dawn in the perspective of public living of 21st century, having sex with any other person instead of a spouse could be subjectable & offended by most of our nearby people. But having it as a slave where the male is dominating or vice-versa that too without consent is not right, not just for feminism, but for the entire humanity. When we are talking about equality it is something which not fit correctly. If you take it as social, then it will say- it is god gift not to sell around. And on the abstract canvas, if you look at, it only seems to boost males that females are commodities to be bought and sold. Reality check – rapes & human trafficking are not gone cases in any countries with illegal prostitution neither legalized countries, all females sit around with fear of being sold or bought, do they? –NO, it is all about lack of education, information, manners & values.

The major considerable reason for the denial of legalization is that its decriminalization somehow affects the female position in society & the public negatively. By legalizing it we are giving them consent to see every woman as a commodity only to be bought & sold. It is way more of moralistic prejudice based on religion or an idealistic form of feminism.

In favor of the legalization of prostitution, everyone owns their body it should be their decision personally and for forced one, who unwillingly get involved in this field, legalization could be the knight in shining armor. Because there is no other way you can trace them in such a complex field without handling it legally that too when we itself accuse them as criminal & disrespect them. Legalization help to report mistreatment without any fear of being illegal. They can work in a less hostile condition. It will benefit prostitutes, if we care about their health and their well-being, if we want to make them out of the trap of prostitution, its legalization is the best way. Even it is also helpful in decreasing human trafficking, drug cases, etc.

If I talk about Asian countries, human trafficking, rapes & illegal practices are well known. Children abducted & forcefully send to be a child prostitute or being part of it & rest got trafficked to other continents through the black market. Sometimes parents themselves sell their girl child in greediness. And once they enter it, they got trapped in it. They were part of illegal activities and treated as a criminal, called by names, illtreated even though they got no option other than it & to prove their innocence.

Is there no way around to make both ends at peace – socially, ethically as well as human rights?

Well, not completely but legalization can be worthwhile for leading away to key factors.

Legalizing is not promoting the selling of sex but it is the only way around to make things favorable and good for both sides. At least trapped ones get their rights. In a legalized way, we can divert their mind to other professions & try to make their life a little better. All this is possible when we monitor them, keep track of those who involve in this complex trap legally. Ignoring truth & back-facing it not going to change the bitter reality but lead to bitter consequences. Better facing it & solving it.

And yes! This is ethical, ethical & right to at-least own our life.

Just a student & on a journey of self-improvement. A paper & pen is all I need to voice out my every unsaid thought & sentiment.

Tags:prostitutionsocial topic
previousIs adolescence the most complex phase of life?
nextPoetry: God is a Woman?