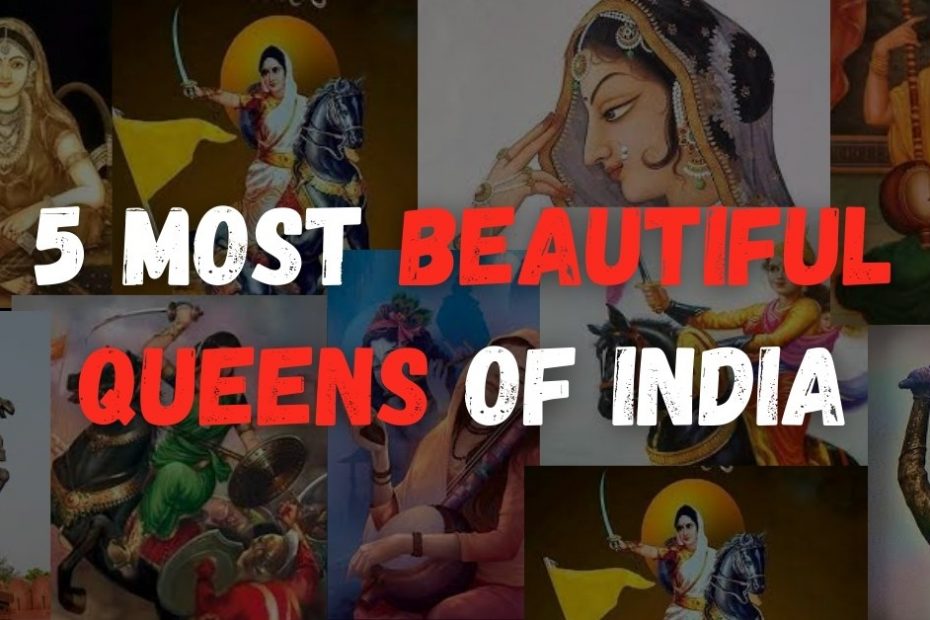 Women were always considered “goddess” and “Shakti”. But The status of women in medieval India degraded gradually despite knowing the fact that she is strong and the womb of the Universe. Most of the time she had to give up her peculiarity and was offered minimum roles in society. She was protected by her father in her youth, by her husband after her marriage then by her son in her adulthood. Several centuries ago, the ruling dynasties mostly advocated men as successors to the throne, and women were entrusted to the backstage work. However, there have been some daring atypical queens who became rulers and succeeded equally as their male counterparts. Here are the top five queens from India who didn’t submit to the dominating society and made their own identity

MeeraBai was born in 1498 AD at Kurki village in Merta District of Rajasthan. She was born to Veer Kumari and Ratan Singh. Meera’s mother died during childbirth when Meera was around eight. She was then raised and educated by her grandfather, Rao Dudaji, and her father’s older brother, Rao Viram Dev at Merta.

MeeraBai was soft-spoken, mild-mannered, god-gifted, sweet, and sang with a divine voice. She was supposed to be one of the most astounding beauties of her time with her prominence spreading to several kingdoms and provinces. Meera Bai was a great devotee of Lord Krishna. Despite facing disinclination from her own family, she lived an ideal spiritual life and composed many devotional bhajans. Because of that reason, Meera’s father married her to Prince Bhoj Raj at the early age of 18. Meera unwillingly married Bhoj Raj, in 1516. And even after her marriage, Meera continued her worship for Lord Krishna. However, Bhoj Raj died after a while in 1516. And Meera’s father-in-law, Rana Sanga, saw her husband’s death as to how to urge obviate her. He commanded her to commit Sati. However, she said that she would not do this as her real husband, Sri Krishna had not died. After this experience, her family continued to maltreat her. They restricted her movements and tried to make her life as difficult and miserable as possible. Yet in the face of all these trials and tribulations, she remained disentangled from her physical suffering. There was nothing that would bother her inner connection to Lord Krishna. It is said that twice her family tried to kill her, once through a venomous snake and once through a toxic drink. In both instants, it’s said that Meerabai got protected by the Grace of Sri Krishna, came to no ill harm. Lastly, she escaped to the holy city of Vrindavan where she was free to worship Krishna to her heart’s content.

Rani Padmini or Padmavati was the queen of Rawal Ratan Singh, King of Chittor. The tale of Rani Padmini of Chittor is a legendary tale of courage, sacrifice, tragedy, and deceit which is beautifully depicted in the epic poem by Malik Muhammad Jayasi. The poem beautifully portrays how on the verge of humiliation she preferred death over disrespect.

Her extraordinary beauty was celebrated and communicated in kingdoms and courts across the whole country. Raghav Chetan, a musician in the Rawal Ratan Singh’s Court, was once insulted by the king due to his behavior. He could not digest this insult and swore vengeance. On his way to Delhi, Raghav crossed the forest to which Alauddin Khilji frequently visited for poaching. He then told the Khilji about Rani Padmini and her spiritual beauty and Khilji was also convinced that the queen deserved to be in his harem. When Khilji reached Chittor, he was shocked to ascertain the fort was massively guarded. But as he was desperate to see the queen, he pleaded with the king to allow him a glimpse of the queen. The king allowed Khilji to ascertain the reflection of Padmini within the mirror. Though this was a shameful act as women were to be veiled at all times. After seeing Padmini, Khilji was determined to make her the Queen of Delhi. After being accompanied out by the king, he grabbed his chance and arrested the Rana Rawal Ratan Singh and asked for Padmavati in exchange for the king.

The Queen made a witty move and decided to play along. She sent word that she would hand over herself in the morning. In the morning, 400 palanquins descended upon Khillji’s camp but out-jumped not the queen or her maids but soldiers who freed the king and headed back towards the fort. Fooled by the trick, irritated Khilji attacked the fort. Knowing that they can’t win, brave Padmini committed Jauhar so that she won’t lose her pride in the enemy’s hand.

Rani Chennamma was born within the tiny village of Kakati in Belgaum, the state in 1778. She was trained in blade fighting, sport, and horse riding and got non-public lessons reception at a young age.

Once King Mallasarja of Kittur saw Chennamma and was drawn to her confidence and bravado. Though, he was already married. He took Chennamma as his second spouse. Then, they had a son who died at a young age. King Mallasarja conjointly passed on to the great beyond. when her son died in 1824, she adopted Shivalingappa and created him successor to the throne. However, the British government obligatory the belief of Lapse policy on her states. In keeping with that native rulers weren’t allowed to adopt a toddler if they had no youngsters of their own. And if they did their empire would come back below the administration of the geographic region. Thus, by the law, the state of Kittur came below the administration of the British Asian nation. Blue blood Chennamma sent a letter to Mountstuart Elphinstone, Lieutenant-Governor of the city Presidency appealing the circumstances of Kittur, however, her request was turned down, and war bust out. Blue blood Chennamma and therefore the native individuals powerfully opposed British high-handedness.

In 1824 the primary battle that occurred, many British troopers were killed together with their collector author Humiliation of defeat at the hands of a tiny low ruler maddened the British Empire and sent larger armies to Kittur. A fierce battle was fought however this point because of the variety of traitors in her camp she lost the battle and was captured by the British and their treasury was plundered. It is aforesaid that such was her unconquerable courageousness and boldness that she tried to interrupt out double from the Kittur fort however was recaptured each time so place in solitary always. She spent her last days playing pooja and reading the holy texts until her death. She died in 1829 with the dream of a free Kittur in her heart and mind.

Ahilyabai Holkar is flamingly remembered as a motivating, angelical, and brave girl. She valorously dominated the dominion of Indore for many years. Her rule is recognized as a golden age within the history of Indore.

She was born within the village of Chondi in Jamkhed, Ahmednagar in 1725, she was lovingly said Rajmata. Ahilyabai Holkar was the Holkar Queen of the Malwa kingdom she was the spouse of Khanderao Holkar. In 1754, Khanderao Holkar died throughout the battle of number, and when twelve years in 1766, her male parent maharajah Malha-Rao-Holkar died in Alampur. Hence, Ahilyabai resumed management of the kingdom’s affairs by 1767. because of her effective supervising and administration shortly, the dominion became prosperous. This attracted the envy of many. At that, the Maratha Empire was at the highest of its power. The supreme ruler of the Empire, Peshwa Raghoba, was inspired by one of Ahilyabai’s ministers to grasp the surplus wealth of the Indore and take them under their management. Ahilyabai showed him that below the agreements that allowed the wealth of the treasury was speculated to be for the well-being of her voters or charitable functions. The Peshwa was maddened that she disobeyed him, and frightened her for battle. She successively asked him to come back and meet her on the battleground. She congregated a tiny low force, including many ladies, and taken off to fight. A letter was sent to the Peshwa that displayed the subsequent message: “Now I will be able to show you the way weak I am. If I lose fighting against men, I will be able to lose nothing. however, if you lose the battle against ladies then you’ll be in trouble! And bear in mind, that’s specifically aiming to happen.” This born-again the guts of Peshwa. He said, “You have misunderstood Pine Tree State. I have not come back to fight, however, to mourn your son’s death.” He finished staying as Ahilyabai’s guest for one or two months and was completely stunned at the talent with that she dominated.

Rani Lakshmi Bai was one of the front figures of the Indian Rebellion of 1857 and she became a logo of resistance to British dominion. She motivated several generations of Indians, therefore turning into an immortal character.

The life history of the Jhansi Ki Rani favored the sacrifice of her life at the young age of twenty-three years in battle, which is extremely encouraging. She surprised Britishers by showing outstanding fighting spirit and valiancy in battles fought at Jhansi, then Kalpi, and last at Gwalior. Such a rare woman, she tied her son on her back to fight. However, this kind of fighting battle, won’t be found within the history of the globe.

One of the numerous stories of her bravery is her fight with Sir Hugh Rose. Sir Hugh Rose was hand-picked by Brits to capture patrician Lakshmibai, alive. On the twentieth of March 1858, Sir Brobdingnagian camped along with his army three miles off from Jhansi and sent a message to her that she ought to surrender; however, instead of surrendering, she stood on the wall of her fort forcing her army to fight Brits. Even when three days of continuous firing, the fort of Jhansi couldn’t be attacked. however eventually, on third April, the military of Sir Hugh Rose entered Jhansi. At that time, patrician Lakshmibai set to affix metropolis by breaking the block of the enemy. within the night, along with her organization of sure two hundred cavalries, she tied her 12-year-old son Damodar to her back and raising the catchword of ‘Jai Shankar’ left her fort. She jumped on her horse Badal from the fort and at liberty within the night along with her son, enclosed by guards.

So, it is all the thoughts and narration I could give you. If you like it share it with your friends and family and give your suggestions in the comments. I’ll be grateful.