17 Strange and Unknown Facts about Dubai 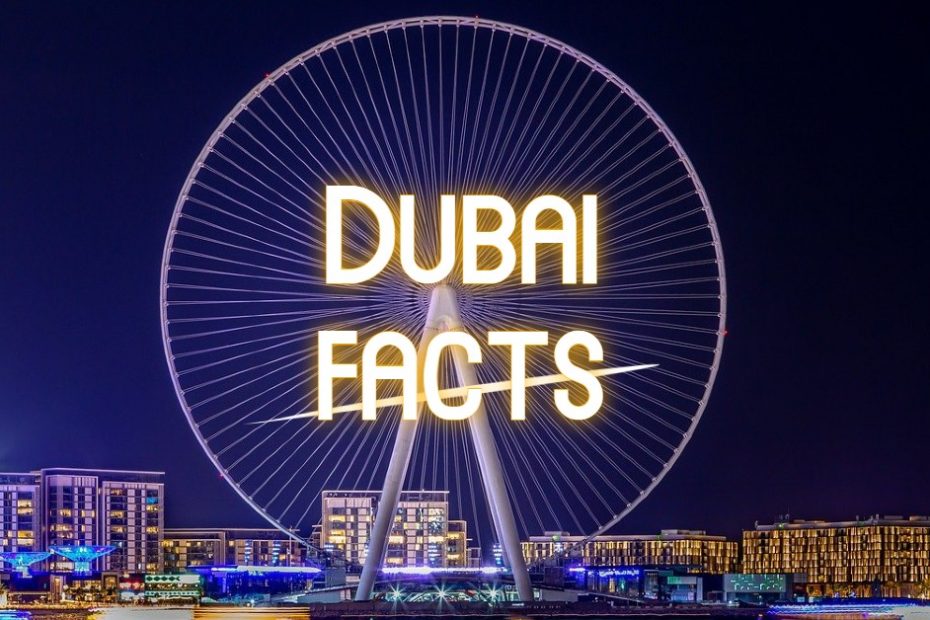 Dubai is perhaps the most intriguing destination in the world. The city has garnered many nicknames and is fondly called the futuristic global city.

But did you know? In 1991, the emirate had just one skyscraper in the entire city! Today, everywhere you look in Dubai, you find colossal towers and jaw-dropping architectural marvels that adorn the city skyline.

There are more fascinating observations and facts of Dubai city that will blow your mind away. Let’s check out a few of these.

01. The city of superlatives, Dubai

The city of superlatives, Dubai has the best of the best in the world to offer its visitors. Dubai has to its name more than 425 Guinness World Records which includes:

Some record-breaking attractions of Dubai need a separate mention altogether.

The Earth’s tallest tower – Burj Khalifa has a stash of record-breaking triumphs to its name. Apart from being the tallest free-standing man-made structure in the world at the height of 829 meters, Burj Khalifa is also the only place in the world where you can:

The Burj Al Arab Jumeirah is the world’s only 7-star hotel which is located at Umm Suqeim 3 in Dubai. Built on an artificial island, the hotel is a remarkable icon of modern Dubai. The interiors are gilded with actual 24-carat gold leaf. The hotel is utterly luxurious where you can have a cappuccino with gold flakes sprinkled on top of it.  It also comprises the most expensive suite in the world priced at over 20,000 USD per night!

Dubai is often tagged as the ‘City of Gold’ and the emirate truly does live up to this name. There is a whole souk dedicated to gold jewelry and you can even find vending machines that dispense gold bars.

Dubai’s Palm Jumeirah happens to be the biggest man-made island on the planet constructed in the modern world. It is also visible from the space.

Another interesting Dubai fact is that the emirate has the longest unmanned metro route in the world spanning 75 km long and is in the Guinness Book of World Records as the city with the longest automated metro line.

07. Sundays are on, Fridays are off

Sundays are working days and Fridays are holidays in Dubai. Being an Islamic city, Friday is considered as the day of faith and is kept free for prayers. Weekends in Dubai hence are on Fridays and Saturdays. The first working day of the week is Sunday.

08. Prominent power in the political decision-making

Dubai has a prominent power in the political decision-making of the UAE as the ruler of Dubai – Mohammed bin Rashid Al Maktoum is also the Vice President and Prime Minister of UAE.

09. Dubai has a Ministry of Happiness and Wellbeing

In the year 2016, the Ruler of Dubai established this ministry to review the happiness index of the city and has government policies, and projects to enhance the happiness and positivity quotient of lifestyle amid Dubai’s residents. It has a dedicated Minister of Happiness – Her Excellency Ohood bint Khalfan Al Roumi.

10. Dubai has only one main season – SUMMER!

Dubai is a desert city and it has year-round sunshine. The months fluctuate how hot they are and October till April happens to be mild summertime which is considered as winter months of Dubai. Dubai’s climate is hot and dry throughout the year and it rains only a couple of times a year. The average rainfall is said to be 3.71 inches per year.

11. Dubai: Most airconditioned city in the world

Being a sunny, arid city, Dubai is also the most airconditioned city in the world. Almost all the buildings, attractions, hotels, shopping malls and even bus stops are fully airconditioned to get relief from the heat.

12. Don’t be stunned if you find sleek supercars as police cars in Dubai

Dubai’s police force has a fleet of supercars at their disposal so it is a pretty normal sight to watch them drive around the city in a Ferrari, Bugatti, and Mercedes. They also have the fastest police car in the world – a Bugatti Veyron. The police force in Dubai uses these cars to gain an advantage over criminals during high-speed chases.

13. Dubai is a city of expatriates

The local Emirati residents make up only 15% of the city’s population. Rest 85% are foreigners and the majority of expats come from Asia.

Did you know you can go snow skiing in Dubai? Located at the Mall of the Emirates, Ski Dubai is a temperature-controlled indoor ski destination that offers locals and visitors a chance to enjoy winter sports activities in the desert city. You can even watch penguins waddling around inside this snowy attraction.

15. Dubai does not tolerate the public display of affection

In Dubai, love is in the air, but it comes with limitations. Though Dubai is known as a romantic holiday destination and has plenty of attractions that can be included in romantic holiday Dubai packages, the city does not tolerate the public display of affection. Those on a romantic holiday must keep this in mind. Married couples can hold hands, but kissing or hugging in public can attract a heavy fine or jail term.

Law in Dubai is not as severely strict as compared to other emirates of UAE but some visitors may find it unusually stringent. There are cases where people are arrested or fined for shouting, swearing in public. You can even get fined for photographing locals in Dubai without their consent.

17. You need a drinking license to consume liquor in Dubai

Being an Islamic city, Dubai has a prohibition on alcohol consumption. Only non-Islamic people can consume alcohol and you need to apply for a registered license to enjoy a drink.

So, these were our 17 strange and unknown facts about Dubai. If you enjoyed this article, do not forget to share it with your friends and family. Also, provide your views in the comment section.

She is a nature lover and enjoys exploring mountains, forests, and lakes. She is always looking for offbeat adventures and enjoys hiking, trekking, and seeing places on foot. She enjoys reading and playing badminton in her free time.